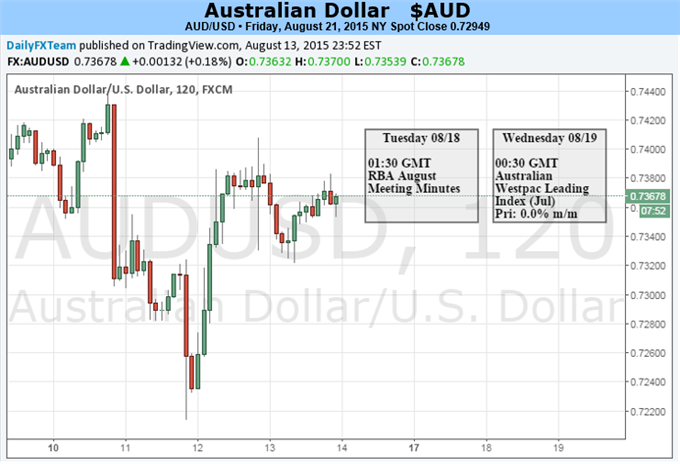 The Australian Dollar finished last week with the worst performance in seven months, dropping over 2 percent against its top counterparts as market-wide risk aversion weighed on the sentiment-linked currency. The rout across emerging-market assets and global equities had rekindled speculation that the RBA will need to embark on further monetary easing. Indeed, a measure tracking the priced-in outlook for benchmark lending rate dropped to the lowest level in nearly two months last week and now calls for at least one 25 basis point cut in the next 12 months.

In the week ahead, comments from RBA Governor Glenn Stevens will put this interpretation of the selloff to the test. The central bank chief is due to speak at the National Reform summit organized by The Australian and The Australian Financial Review newspapers next week. He will almost certainly comment on the impact of the slump across global exchanges on Australia’s own fortunes and the possibility that negative spillover will beckon additional policy support.

Rhetoric suggesting that officials are being made uneasy by recent developments and have started to ponder the need to reduce borrowing costs further is likely to weigh heavily on the Aussie Dollar, whereas a sanguine posture could offer a degree of support. The former scenario seems likely to inspire greater follow-through however. Central bankers typically take a longer view of economic trends than financial markets so investors are unlikely to be meaningfully surprised if Stevens opts for a wait-and-see approach. On the other hand, a palpable dovish done shift would imply the RBA sees lasting headwinds ahead.

On the external front, US economic news-flow takes top billing as home sales, consumer confidence and updated GDP figures cross the wires. As before, the outcomes are likely to be judged in terms of their implications for the likely timing of the Fed’s first post-QE interest rate hike. Improvements are expected across the board, but the implications of such outcomes may prove somewhat counter-intuitive.

The markets have interpreted recent risk aversion as likely to delay tightening, with the priced-in outlook for the year-end standing of the Fed Funds rate falling alongside the S&P 500. This hints that while a stronger US economy amounts to broadly good news for global output, the possibility that upbeat data encourages the Fed to begin withdrawing stimulus in an otherwise difficult environment may be seen as decidedly risk-negative. This suggests that the Aussie may suffer if upbeat US data prints on the strong side. With that said, the possibility that firmer figures are on-boarded as supportive for sentiment and thereby lift the Aussie ought not be fully discounted. –IS