The dollar is staging an advance of a duration and magnitude that has not been seen for several years. The pace has taken many unaware, even though dollar bulls have been repeatedly frustrated. For several quarters, investors, analysts and reporters struggled to explain why the euro in particular was seemingly inexplicably strong, and now that is has reversed, there is feigned surprised.

Fundamental, technical and psychological factors are in alignment, pointing to a stronger dollar. The divergence between the US (and UK) on one hand, and the euro area and Japan, has been long anticipated.

It was expected to be driven by the tightening of monetary policy by the Federal Reserve and the Bank of England. Instead, the precipitating factor has been driven by falling nominal rates in the euro area.

A rate hike by the Bank of England and the Federal Reserve are likely six and nine months away respectively (March and June 2015). The ECB has moved first. Although the ECB’s balance sheet has not expanded very much, it has signaled it will.

Despite all the talk after the FOMC new forecasts about a shift toward an earlier hike, we note that the June 2015 Eurodollar futures contract is very little changed. Consider the implied rate at last week’s close was 55.5 bp. The 100-day average is 55.5 bp and the 200-day average is 58 bp.

The implications of negative 20 bp deposit have not proven to be as disruptive as feared, but the longer they persist, the greater the risk of unintended consequences. We simply have not been down this particular rabbit hole before, and, to mix metaphors, policy makers and investors are in uncharted waters.

The BOJ is also engaged in an experiment. The pace at which it is expanding its balance sheet is unprecedented. It is one thing to issue debt (which is to say, borrow) at negative rates like Germany has done. It is quite another to buy bills from the market, as the BOJ has done, at negative yields. It’s not just where the Fed and BOE are headed or the ECB and BOJ, but together both sides are moving in opposite directions. This divergence, coupled with technical breakouts and follow through activity has emboldened many participants.

As the quarter winds down, many participant are revising upward their dollar forecasts. Therein lies the rub. Fundamentally, the dollar bull market has more room to run, but the short-term technical indicators are stretched. And as the position adjustment in the futures market has shown, currency shorts have turned more cautious in recent weeks. Yet dollar pullbacks have been short and shallow.

We take the attitude of a dentist. She cannot tell you which tooth will develop decay. We do not fault her for that. She can help identify the proper oral hygiene necessary to reduce the chances of developing cavities or gingivitis. Similarly, we can add value at the moment by identifying an extended market and suggesting certain levels, and events, that could spur a technical correction that will provide a better opportunity to get with the underlying trend.

We recognize three events this coming week that could provide an opportunity for disappointment, or buy the rumor sell the fact type of activity. The first is the ECB meeting, where Draghi may hold out the possibility of more actions, but will likely focus on the TLTRO facility and asset-backed securities/covered bond purchase program. The second is the US monthly jobs report. The market expects that the August disappointment was a one-off fluke, but we are more concerned that the US economy lost some momentum as Q3 wound down. The third event is the month-end/quarter-end portfolio adjustments by public and private asset managers.

Although ECB officials, and the occasional French politician will talk the euro down with impunity, Japanese officials, including Cabinet Secretary Suga and Prime Minister Abe, have pushed the other way. In recent weeks, only BOJ Governor Kuroda saw unambiguous benefits. The market seems a bit reluctant to push the greenback vs the yen above JPY110. On the downside, the dollar has found bids in the JPY108.25-40 area.

Sterling had been bid up on anticipation that Scotland would reject independence, and has still not recovered from the profit-taking, and technical reversal, on the fact. The technical tone remains weak. For the second consecutive week, sterling finished on its lows. We suspect the $1.6235 area does not offer strong support, and a break suggests a move to the $1.6160 area, but a retest on the previous low near $1.6050 seems likely.

The dollar-bloc has picked up the leadership from the euro and yen. Speculators in the futures market had amassed a large net short euro and yen position, but had remained long the Canadian and Australian dollars, even in the face of a sharp decline in commodity prices and they remain so now. Maybe the dollar-bloc had offered a high yielding alternative to the US dollar, while players were anticipating the greenback’s rally. That the dollar-bloc were easily the weakest currencies over the past week, suggesting this strategy is being abandoned. In the three sessions since the end of the Commitment of Traders report, discussed below, the Australian dollar has fallen a cent and the US dollar has risen a big figure against the Canadian dollar.

Assuming the dollar holds above the CAD1.09 area now, technically, there is potential toward CAD1.1280 near-term, which corresponds to the multi-year high set in late Q1. Above there sights will be set on CAD1.14-CAD1.15. The Australian dollar’s decline has accelerated and it has settled on the week’s lows for three consecutive weeks. Our $08750 target has been reached. The next target is the year’s low near $0.8660.

The Mexican peso has offered little resistance to the dollar’s bull charge. It has disappointed many, like ourselves, who had thought the various structural domestic reforms, and the better growth in the US, especially the auto sector, and manufacturing more broadly, to have underpinned the peso. Instead, the dollar is testing MXN13.50, on its way, it appears, to the year’s highs, set in January-February in the MXN13.55-MXN13.60 area,

Previously, it seemed that volatility across the capital markets was low. The rally in US shares depressed the VIX. The decline in bond yields had subdued bond market volatility (measured by MOVE). The currencies had experienced record low volatility earlier in Q2. The conventional view was that QE offered the grand unified explanation of the low volatility.

The new lows in the euro have not seen volatility (three-month implied) make new highs, as it did earlier in the move. It remains firm just below 7.3%, having put in the recent peak just above 7.5% on September 11. Sterling volatility continues to fall from the pre-Scotland referendum peak, and is now back below euro vol (6.3% vs 7.3%). Yen vol remains elevated, but unless the dollar goes through JPY110, implied volatility may turn lower. It peaked a little below 8.5% on September 10, and finished the week just above 8.0%.

Lastly, we note that technically, the CRB index looks to be potentially carving out a near-term low. The sharp downside momentum has begun easing, and an outside up day was recorded in the middle of last week. The index gained three days last week, the most in September. A 1%-2% technical bounce would lift the CRB toward 283-286, which corresponds with short-term retracement targets. The U.S. 10-Year Treasury yield ran out of steam near the 2.60% level and returned to 2.48% at the end of last week. Additional support is seen n 2.45%. If this level is convincingly breached, it could take pressure of credit spreads and emerging markets.

Observations from the speculative positioning in the futures market:

2. All of the currency futures tracked here saw a decline in the gross long positions. There were no exceptions. Last week, all but the euro saw an increase in the gross short positions.

3. The Australian and Canadian dollar, and the Mexican peso still have a net long speculative position. These could be reversed in next week’s report. The positioning in the futures market suggests that in the dollar-bloc longs are being cut faster than short are built. The decline in the peso appears to be a function of both in roughly similar portions.

4. The net speculative position in the 10-year US Treasury futures swung back to the longs. Speculators were net long Treasury futures at the end of August. The small net long position of 8.8k contracts compares with last week’s net short position of 6.8k contracts. The small net position should not be confused with small gross positions (and the financial pipes have to be able to handle gross not simply net flows). The gross long position rose by 16.5k contracts to 460k. These are bottom pickers who bought as yields rose. The gross short position increased by less than a thousand contracts and stands at 451.2k. 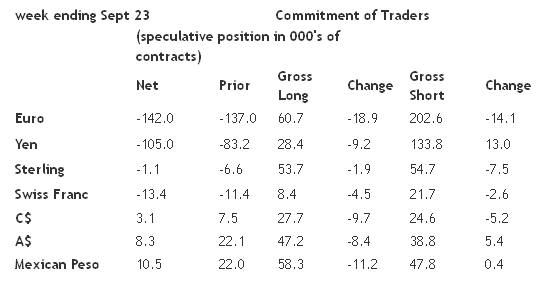