With gold trading in a narrow range below $1,300 and remaining relatively weak, it is worth pausing at this juncture to look at the combination of factors that are affecting its price formation.

A current snapshot of the world gold market and its near term outlook can be gauged by examining four sets of influences on the market, namely the macro/geopolitical environment, investment demand flows, physical demand in the major markets (using India as an example), and finally the technical picture.

Macro Economic/Geo-Political
Overall sentiment in the gold market continues to be set by the global geopolitical and macro environment.

The relative strength of the US economy compared to other economies is currently creating relative dollar strength, even despite the fact that the monthly US non-farm payrolls for August came in at 142,000 new jobs last Friday, this was substantially lower than the consensus predictions of 200,000.

This is because other major currencies are making the US Dollar look good. The British pound is weakening due to the heightened uncertainty over the outcome of next week’s Scottish independence referendum, while last week’s European Central Bank (ECB) cut in interest rates and expectations of sovereign bond buying by the ECB later this year are weighing on the Euro. Therefore, with pressure on the Pound and the Euro, the US Dollar is displaying relative strength.
As gold price discovery on world markets is in US dollars, and most pricing and trading is in US dollars, as the dollar strengthens, gold purchases become more expensive for non-US dollar denominated investors. This is just a fact of the market.

With the recent ceasefire in the Ukrainian-Russian conflict, the relative demand for gold as a safe haven asset has dwindled in the last week. Today a report by Dutch investigators  into the downing of Malaysian Airlines flight MH 17 only stated that the flight was likely downed by an outside impact. Since the report’s conclusions appear to be deliberately ambiguous, this does not appear to change anything as far as the ceasefire or the negotiating position of any peace negotiations.

Investor Demand
The flows of investment into and out of physically backed gold Exchange Traded Products (ETPs) are also helpful in gauging sentiment in the world gold market.

In August there was a net 17 tonne outflow from physically backed gold ETPs, with an outflow of 6.5 in the last week of August. ETPs include the GLD (SPDR Gold Shares) and the IAU (iShares Gold Trust) products. The total accumulation of gold in these products then stood at 1,726 tonnes at the beginning of September and was down 36 tonnes compared to the beginning of the year.

While this year-to-date drop is not much compared to the 800 tonne outflow in 2013, it is still a sign that investors who use the ETF/ETP route, are not, on a net basis, allocating new money to gold.
In first week of September there were 13 tonnes of outflows from physical gold ETPs. In GLD, the total holding is now at 785 tonnes, and total ETP holdings (in all tracked products) are now down to 1,713 tonnes (as of September 4), nearly 3% lower than the start of the year. Thus, ETP flows are slightly bearish at the moment but overall quite neutral.

Investor sentiment in the gold futures market as well as coin demand for the bullion coins of the major Mints are also used as additional gauges for investor demand flows, but at the moment, these gauges, along with the ETPs are just neutral to slightly bearish.

Physical Demand in India
Physical demand in the large consumer gold market of India has been weaker than expected because the newly elected government has not yet reduced gold import restrictions despite the trade balance having improved.

Last year, the fall in world gold prices saw a surge in gold imports into India which had a large negative impact on the trade balance and weakened the Indian Rupee. Import duties on gold rose to 10% and import restrictions were imposed specifying that of all the gold officially imported, 20% had to be re-exported. Other import restrictions were also introduced for banks and trade houses that usually import gold.

These restrictions on gold demand worked as expected however they led to a sharp increase in gold smuggling into India. Although official figures on gold smuggling are just estimates, the World Gold Council speculates that for all of 2014, Indian gold imports via smuggling could reach 200 tonnes. This is about the same amount as was imported into India officially during Q2 of this year.

It remains to be seen how the new Indian government views the current import restrictions on gold. They may wait in the near term before tweaking with economic policy that has helped to improve the trade balance. 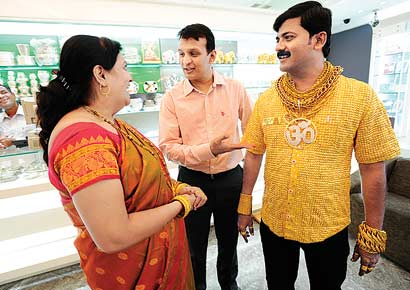 The Indian festival and wedding season is fast approaching however, which is always seen as a positive factor in the annual cycle of Indian gold demand. The major festival of Diwali is on October 23, while the end of year wedding season peaks in November and December.

The wedding season is important since in traditional Indian society, gold is given as wedding gifts as well as being a source of demand for wedding jewellery.

Another factor impacting gold demand in India is the monsoon season since this affects crop production and dictates how much disposable income is available to rural Indian society to save in the form of gold. If a monsoon season is weak then sometimes saved gold is even used to raise cash to balance household incomes.

Interesting, Jim Sinclair, the well-respected gold expert and technical analyst said yesterday that gold cycles which turned gold back from the $1,900 level in 2011, have now turned up and are indicating that the gold price which is now in a major support area, will now aim to reach a $2,100 target area.

The US Dollar Index is currently trading near its 14 month high which was reached in July 2013.